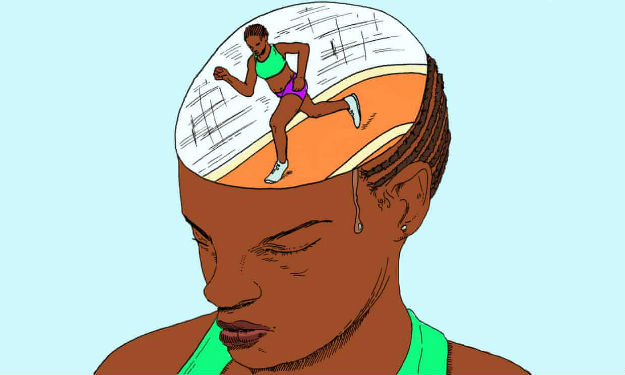 Brain activity is often compared to muscle work. It is this comparison that underpins the whole education system, which assumes that pupils have to sit hunched over their desks all day long. It is thought that maths and reading are more useful and can improve brain function more than running, playing games and learning while moving.

However, this analogy doesn’t quite work. To increase your biceps, you need to flex them. And when it comes to the brain, an indirect approach can be unexpectedly effective. Muscle training in particular can be very beneficial for grey matter.

New scientific research can help you choose the best ways to be physically fit to successfully tackle mentally demanding conditions.

Scientists show that states such as runner’s euphoria and yoga tranquillity have profound effects on the brain. What’s more, specific physical exercises can markedly alter the structure of the brain.

A whole series of studies have emerged on the unexpected links between mental and physical health. The results of these studies may provide a good incentive to increase activity. They can also help you choose the best physical exercises to prepare for mental tasks such as exams, interviews and creative projects.

The part of the brain that responds most to aerobic exercise is the hippocampus. Well controlled experiments in children, adults and the elderly show that it increases in size with improved physical fitness. Since the hippocampus is a major element of the learning and memory system, this discovery partly explains the effects of improved memory when strengthening the cardiovascular system.

As well as slowly increasing memory on your ‘hard drive’, exercise can have a direct impact on memory formation. German researchers have shown that walking or cycling during, but not before studying, helps you learn and remember new foreign words better. So exercise while you study. But don’t overdo it: intense exercise can increase stress and have a negative effect on your memorization ability.

As well as improving your memory, exercise can help you concentrate better on the task at hand. The most scientifically convincing studies are those done with schoolchildren, but the same is probably true for all ages.

Exercise with 20-minute breaks for aerobic exercise improved concentration in Dutch schoolchildren. Meanwhile, a large randomised controlled trial in the USA examined the effects of daily exercise after school during the school year. Naturally, the children’s physical fitness improved. There was less predictable improvement in self-control. Children became less distracted by external stimuli, were able to multi-task, and improved their memory and information use skills.

And if all that sounds like drudgery, you don’t even have to take your breath away to reap the benefits of mindfulness training exercises. Just 10 minutes of mindfulness exercises, such as hitting a ball on the floor with both hands at the same time, improved the concentration of a large group of German teenagers.

Like it or not, physical activity can have a powerful effect on your mood. The runner’s euphoria – the feeling of elation that comes after prolonged, strenuous exercise – is a completely real thing. Even mice experience it. However, it may not be due to endorphin fever. Levels of opiates produced by the body rise in the bloodstream, but it is unclear how much endorphins actually reach the brain. At the same time, recent evidence points to a pleasurable and pain-relieving excitation of the endocannabinoid system: the psychoactive receptor for cannabis.

What about yoga? Does it help with stress? When you’re feeling stressed, your tension level goes up, your heart rate goes up and your concentration goes down. The body’s “fight or flight” response to stress is automatic, but that doesn’t mean it can’t be controlled at all.

Yoga teaches control of movement and breathing in order to activate the body’s “relaxation” mode. There is a growing body of scientific evidence to support the benefits of yoga. In a 2010 study, for example, participants practised yoga and meditation daily for 8 weeks. In addition to reducing stress levels, brain scans showed a reduction in the size of the amygdala, an area of the brain that plays a major role in the appearance of stress, fear and anxiety.

Thoreau, Nietzsche and many other creative people have claimed that walking ‘lights up’ the imagination. Last year, psychologists proved that claim experimentally. Walking, whether on a treadmill or around the campus of Stanford University, improves divergent thinking – the ability to find multiple solutions to the same problem. Admittedly, it has no effect on convergent thinking. So if you are struggling to find one single solution, an easy walk is unlikely to help you.

The evidence that keeping fit promotes brain health in old age is particularly compelling. The link between aerobic exercise and cognitive retention seems most clear.

Exercise doesn’t have to be extreme: 30-45 minutes of brisk walking, three times a week, can help prevent mental exhaustion and delay the onset of senile dementia.

Get your body into the habit of regular exercise, and the results will not be long in coming. The effects will be noticeable even before the first signs of age-related cognitive decline.

The benefits go beyond strengthening your lungs and heart. Exercises to improve coordination and flexibility have had a clear positive effect on the brain structure and cognitive function of a large group of elderly people in Germany. And strength training twice a week has visible effects on the nervous system. Dancing can also have a restorative effect on the aging brain. Just one hour of dancing a week for six months did not particularly increase the aerobic endurance of the elderly participants, but the physical activity and interaction with others promoted spiritual well-being.

Researchers are still trying to identify the most important factors that make exercise have such a powerful tonic effect on the brain. Among the most likely ones are increased blood flow to the brain, surges of growth hormones and the dilation of the brain’s blood vessel network. It is also possible that exercise stimulates the formation of new neurons. Until recently, few believed this could happen in the adult brain.

The effect of exercise on cognitive ability seems to remind us that the brain does not work separately from the rest of the body. Everything you do to your body has an effect on your mental faculties. Sitting on your butt all day is dangerous. So don’t think too much about types of exercise. Choose what you like and just do it.