To be successful in ‘biceps building’ you need to give sufficient stimulating load to both bundles.

And also for the highest peak you have to work the brachialis muscle underneath the biceps. Here is a picture of Arnold’s brachialis:

This is what the brachialis muscle (brachialis) looks like – it attaches to the coronal process of the ulna.

Now let’s move on from the anatomy directly to the exercises and scientific data.

This exercise should also be included in arm training – so says the science. For example, experts from the organization ACE (American Council on Exercise) in 2014 found that pull-up in terms of EMG activation of biceps muscles suddenly ranks second, bypassing even a basic biceps lift with a barbell and yielding only to concentrated arm flexion.

A couple of reasons why the pull-up is still better than any variation of the biceps lift (for mass): 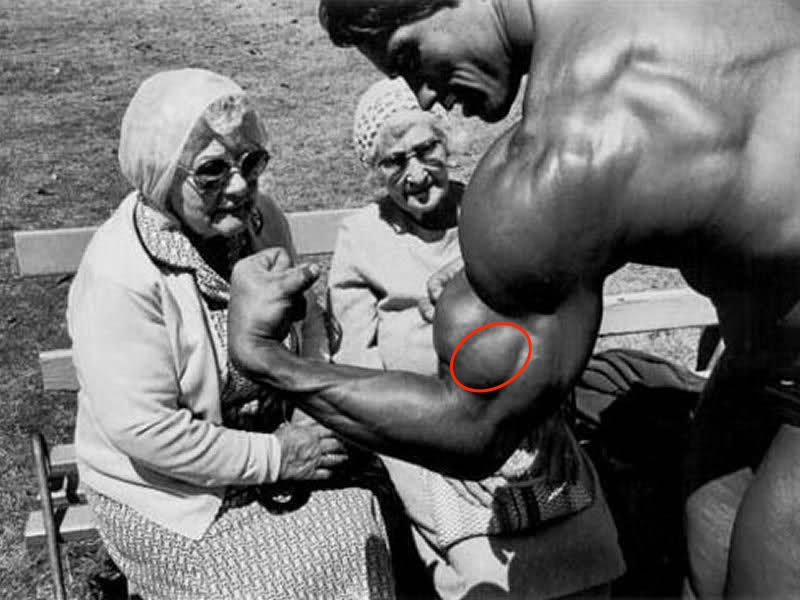 2. Arm bends with dumbbells on an incline bench (for the long bar)

While both biceps curls work together, certain exercises can help to make one or the other more active. In this movement, the focus is on the long (outer) head.

3. Concentrated biceps lift with a dumbbell (for the short bar)

Now let’s set the stimulus for the short (inner) head as well.

As previously stated, this exercise is the champion of muscle fibre activation of all ‘biceps’ exercises.

Maximum activation is provided by the combination of arm flexion and forearm supination (turning to the outside), another function of the biceps (study).

During forearm flexion, it’s important to add supination (turning outwards) as well – this helps to fully load the biceps muscle.

Researchers also noticed that the participants in the study are more likely to put in a lot of effort when doing this variation of biceps curl. Apparently, the brain-muscle connection is the highest (which, of course, promotes hypertrophy).

4. Arm curl with EZ-grip in a pronated grip (for the shoulder muscles)

And let us finish flexors of arms with an exercise, in which brachialis works more actively.

Since biceps muscles are more actively involved in forearm supination, the pronated grip takes the load off them and transfers it to brachialis (examination). And a curved grip is more comfortable for the joints involved (compared to a normal grip).